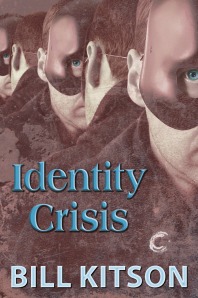 Bill Kitson, a retired finance executive, was born in West Yorkshire. He is an avid fan of cricket and cryptic crosswords and is also the former chairman of the Scarborough Writers’ Circle. Identity Crisis is the sixth instalment in the Mike Nash series, following Kitson’s gripping thrillers Depth of Despair, Chosen, Minds That Hate, Altered Egos and Back-Slash.

Alone in an isolated cottage, a young housewife awaits the arrival of her sister, Jo. Outside, as storms lash the country, Dr Johana Grey struggles to reach the house, finding it deserted, and in darkness, when she eventually arrives.

With Mike Nash on leave, DS Miranova leads the investigation, which is complicated by the husband of the missing woman being unaccounted for. Is he responsible, or has she been abducted by the sadistic serial killer nicknamed The Cremator?

Before Nash’s return, a security van disappears along with its two-man crew. Further violent crimes are reported and, as the detectives try to make sense of the confusion, it becomes apparent that nothing is as it seems and no one is quite who they appear to be.

This is the sixth title in the intricately drawn series featuring Mike Nash and the Helmsdale police force.

Praise for the author:

‘Intelligent and complex enough to satisfy the most ardent of whodunit fan’ – milorambles.com

Identity Crisis by Bill Kitson is available to buy now with a limited time only 30% discount.