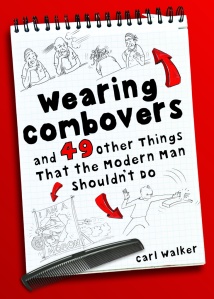 Carl Walker is a senior lecturer in psychology and he has ten years’ experience researching and publishing academic work on human behaviour. He is uniquely qualified to write this book on account of being the only man who considers himself a world authority on men who juggle. He lives in Sussex with his family and his hobbies include avoiding men who wear comedy ties and thinking up innovative new ways to hide his man boobs.

Modern men have a tendency to do a lot of unusual things. Some wear comedy socks and ties. Others labour under the curious misapprehension that cycling without using ones hands constitutes a social achievement. You may see a man in the street throwing a sweet up in the air with the sole purpose of trying to catch it in his mouth. You may have met a man who has managed to convince himself that his combover could be mistaken for a lustrous body of hair.

In a moment of historical literary significance matched only by the Doomsday book and the first edition of the King James Bible, this book finally brings together an account of the strange and frankly unacceptable habits of modern men with the clear and obvious reasons why these habits must, for the sake of the future of the human race, be cast aside.